While the competition for Viver a Rua has been drawing to a close, I have been wandering around the city waiting and wishing for something to ‘happen’. So imagine how my curiosity was aroused as I witnessed hoards of school children rush out of Escola de Carlos Alberto, ushered by anxious teachers. The roar of fire engines and the arrival of Sapadores Porto, who quickly unreeled their hose, followed the exodus almost immediately.

My excitement at being the only person around with a camera to document the burning down of a school in the centre of historic Porto was tempered by the shock and relief of seeing children who had been trapped by the blaze, wearing oxygen masks, escorted by the firemen out of the building. They seemed unscathed but surely they should be taken to hospital for a check up. Shouldn’t someone call an ambulance?

The smoke became very intense and I began to get worried that things were shifting out of control.

But hang on a second. This thick smoke doesn’t smell of anything much more than a 1980s disco. It was only when I overheard someone listlessly turn to their neighbour and utter the word “simulação” that I realised this was simply a drill; a highly theatrical drill maybe but a drill nevertheless.

When I was at school the fire drills consisted of us ‘forming and orderly queue’ in the playground to be head counted by the form teacher. There were no fire engines, no firemen, no smoke and certainly no friends in oxygen masks.

As the fog machine was switched off and they waited for the smoke effect to dissipate, the class sat in a circle on the pavement outside and cheered the burly blokes who had, erm, pressed the ‘off’ button and given them a break from basic algebra.

This cluster of firemen was another to add to my growing collection of men in groups. They are everywhere here in Porto. Gathering on the street to watch football:

Playing cards in the park:

Lounging around on the beach. There is only one woman in this photograph, out on a rock, on her own:

It is extremely rare to see women gathered together. I guess they are all still chained in the kitchen, or like Dona Jacinta who manages the building I am in, permanently sweeping the wood effect linoleum in the communal hallway.

Of course it is perfectly ordinary to see men and woman together too. In fact, Porto is quite kissy kissy in public places. Just along the shore from the group of blokes on the beach, were this semi-nude older couple dancing away. It was a lovely sight. From the esplanade above, the few of us who were there let out a collective sigh of admiration.

Perhaps it is the approach of summer, or (more likely) because I have been on my own here for too long but I’m beginning to see sex in everything. The priapic Torre dos Clérgios is probably the most famous of Porto’s monuments and certainly one of the most popular. It is the highest tower in Portugal, with 6 floors and 225 steps. That doesn’t seem so tall but given that it was completed in 1763 (by Nicholas Nasoni) I guess it was a wonder of its day that has endured.

It has a strange floor level suicide window from which a not fat person could easily choose to take a jump. I crawled on my hands and knees to the opening to have a peer out and then slunk back. Actually I’ve discovered since being here in Porto, for the first time in my life, that I have vertigo. I have never been troubled by heights before and I don’t know what has brought it on. I experience it as both a fear of falling and a desire to push myself over the edge: quite a worrying combination.

There are lots of bells inside as you might expect.

But what I wasn’t expecting was this organ type thing to operate them. I thought that bells were usually ‘rung’ but here it seems they are ‘played’.

I poked my camera over the stone battlements at the top to take some photos. Here you can see the orange roofs of the city stretching down the hill to the Douro.

Here are the ruins of a shopping mall, a famous blot on the city, which looks like the set from a science fiction film about the end of the world. 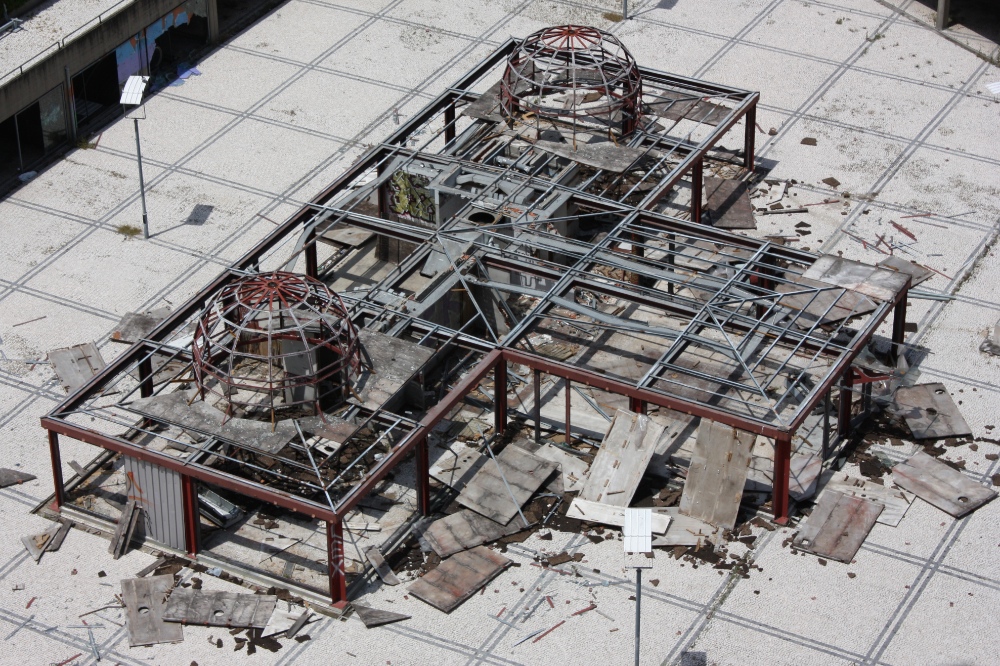 And here you can see Lello, commonly described as the most beautiful purpose built bookshop in the world.

It is extremely beautiful, with its gynaecological staircase tonguing out into the centre of the floor but it is not the best.

The books are oddly divided between highly specific set textbooks for the University just opposite and guidebooks to Portugal for the throngs of tourists that come to tick off another attraction.

One attraction that I will very sadly miss (as it takes place after I have left Portugal) is the second Festival Erótico Medieval.

Yes, it really is a four-day series of ‘sexy things’ in Medieval costume, including a ‘Campeonato Internacional Strip Masculino’ and a ‘Lingerie Restaurant’. How on earth someone came up with this idea, I can barely imagine. ‘You know what I think we really need here in the north of Portugal, is to celebrate the Middle Ages by taking all our clothes off and pony trekking in a pair of armoured wrist bands.’ Still, this is its second year, so they must have the interest.