Everyone in Japan has gone bananas. Costa Rica must be doing a massive amount of shipping across the Pacific. The empty AstroTurf shelves are due to the latest Morning Banana Diet craze. This is probably not news to you. I learnt about the reason for my bananaless breakfasts from Paulien Oltheten, the artist here from Holland. She had heard about it from a friend in Amsterdam who had heard it on the radio. Sumiko Watanabe, a pharmacist in Osaka designed this stress-free diet to help increase the metabolism of her husband Hitoshi Watanabe, who had been rather overweight. Basically you eat a banana (or as many as you want) for breakfast. That’s it. Three-quarters of a million book sales later and I can’t have my usual yellow mornings.

Now that I’m settling into life here I’m enjoying being a little more adventurous in the local supermarket. There are plenty of things that I look at blankly without any idea as to whether they are animal, vegetable or mineral (or a whole other genus) let alone how to prepare them.

One thing I do know what to do with is lettuce. In the supermarket in Moriya you are encouraged to recycle those outer leaves that you normally discard at home, before you even buy it, and a special bin is provided.

Once you have bought it, instead of loading up your goods at the register, you take them to a packing table, where there are various different devices and materials, including a giant metal box of string, which I have yet to see anyone use.

One thing that I have discovered is that the supermarket discounts a lot of the delicatessen produce in the early evening. After finishing at the studio, I can cycle over and pick up the most incredible pack of sushi or sashimi for a couple of pounds. Delicious and inexpensive. Now that’s what I call dinner.

And where does all this sushi come from? Well yesterday I went to the wholesale market Tsukiji in Tokyo. If you want to see the action you need to be there early; very early. I arrived just before 6 in the morning, bleary eyed but excited. I am not sure I have the vocabulary to describe what this place is like. Tsukiji handles nearly 3,000 tonnes of marine life, over 450 species, every single day. It is one of the largest markets in the world and feels like a reasonable sized English town; say Harrogate. The market also trades meat, vegetables and flowers but it’s known for the fish. It’s as if every aquarium on the planet and Orlando Seaworld had suddenly thrown up their contents in Tokyo Bay.

There are streets upon streets of stalls selling every conceivable type of edible thing that was once in the sea.

There are hundreds of electric trolleys zooming around laden with polystyrene boxes of produce.

Your eye catches glimpses of random buckets of particular species…

I nearly got run over by this guy with the most humungous tuna on the back of his cart.

There are some things that you might imagine eating…

…and others that you aren’t so sure about.

There are also warehouses upon warehouses of fish auctions, where men (yes, I think exclusively men) are seen haggling over corpses that lie abandoned around the room.

Restaurant staff, with long shopping lists, load up their vans.

There was so much to see, I could barely take it all in. I wandered around for about an hour, my stomach beginning to rumble and so I went for breakfast in one the of the several sushi bars in the market. There, in that slightly grubby and cramped corridor of a restaurant, the chef put a leaf down in front of me, and plonked a few pieces of pickled ginger at one end with his hand. He then put a cup of green tea next to it. Over the course of the next ten minutes or so, he lay out the freshest sushi in the world along that leaf. Don’t ask me what marine specimens sat on top of those thin layers of very hot wasabi, that separated their newly gutted flesh from the clumps of white rice because I only have the vaguest of ideas. There were white ones, and pink ones, and orange ones and ones of different shapes. I picked up a piece with my chopsticks and placed it on my tongue – and it disappeared. It was as if it were a subtle flavoured angel delight or something; not like sushi I had tasted before. It was the most delicious breakfast I have ever had.

I left by 7.30 am and wandered into the Tokyo day. For some reason I felt oddly emotional. Perhaps it was lack of sleep, perhaps it was the sensory bombardment but I started to get tearful. There, in the busy streets of early morning rush hour, a massive wave of …well what was it… a kind of beautiful sadness, swelled in my chest.

I decided to walk for a while. The so called ‘salary men’ were already entering offices and it felt more like London at 9.30 than the two hours earlier that it actually was.

Wandering up through Nihonbashi, I was suddenly startled by something cycling towards me. What was it? I couldn’t understand what I was looking at. I didn’t know if it was a man or a woman for a start. It just didn’t compute. It was only when another one arrived, then a third and fourth, that I realised that they were Sumo Wrestlers. There was something like a kind of libidinal rush of energy when these four young sportsmen, oddly effeminate and nevertheless utterly masculine, with their massive bodies perched on thin metal frames, passed through the streets in their yukata on the way to practice. 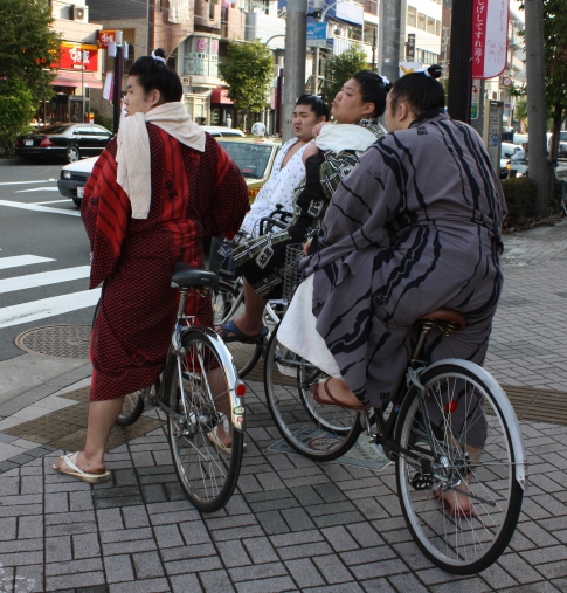 It was really by accident that I then stumbled upon the Nihon Sumo Kyokai, from which I could hear a chorus of low guttural chants and the stamping of feet.

And with the day really still just beginning, I made my way back to Moriya to get some work done. I’ve been given the official ‘no’ to my request for the entire unburnable rubbish collection to be delivered for me to work with. It’s a relief to be honest. I picked up just one bag from the streets and washed and sorted the contents. It took me 2 hours. 20,000 bags might have been a tad over ambitious even for a dedicated labourer like myself. So the project is shifting, almost by the hour and the massively helpful staff at ARCUS are doing their utmost to help me realise my project.