In a day off from rehearsals for Night Market Theatre I went with the Prototype Paradise team on a day trip to Ruisui Township, the southern central East Coast National Scenic Area of Hualien County. One of the highlights for me was visiting Ji Lin Tea Plantation to taste different teas and learn something of the cultivation and production process.

Taiwan is one of the foremost producers of fine tea in the world. As friends and colleagues who have visited me in my London flat will know, I have a tea ‘thing’. Although I am very much a beginner, I enjoy learning more about this amazing drink and its many different incarnations and I have read, studied and slurped my way to a developing palette and a wider knowledge. I have just enough knowledge now to make plenty of mistakes about tea origin, variety and ceremony.

Ji Lin Tea Plantation was established in the 1940s and is now in its fourth generation. Our host was the son of the family Ah-Hsiang. They have won many gold medals for their tea and there are placards around the tea tasting room to let you know.

In Taiwan it is traditional to smell the tea before you drink it. The tea is poured first into a tall narrow smelling cup and left there for a moment. Then it is poured into the tea cup. You smell the fragrance of the tea in the empty  cup first. Then you drink from the tea cup.

Of particular interest was the Pomelo Tea. This is the first time that Ji Lin Tea Plantation have experimented with this kind of flavouring of tea. It is based on a Hakka tradition of stuffing a type of orange with tea but this is Ji Lin’s own idea to use a pomelo. (Hakka are a Han Chinese people with links to Guangdong and the surrounding areas. They have their own language, culture and traditions. A pomelo is a crisp citrus fruit a little similar to a grapefruit.)

Pomelos survive off the tree for a long time. Jin Li use organic pomelos so they can sometimes look a bit ‘imperfect’. Here are a box of them waiting to be stuffed.

First you have to remove the flesh while keeping the skin intact. Here Ah-Hsiang demonstrates the technique.

Then you stuff them with tea and a bit of the flesh of the fruit and tie them with strings. You then very slowly bake them over two months in these bamboo ovens. The strings need to be retied every day as the moisture disappears and the fruit shrinks. It is very labour intensive. The ones on the top of the ovens here are pretty much ready.

You then take a hammer to crack open the hard fruit and scoop out a bit of tea. The taste is a sweet black tea with the a citrus twang. Lovely. After seeing all the detailed preparations I had to buy one. Ah-Hsiang was both happy and sad. We were his first ever customers for this tea. He had lovingly retied those strings every night for the last two months. It was a tough goodbye!

We then walked into the plantation itself to see how the tea is grown.

Here are some tea bushes that are used for oolong tea.

And here is the flower of the tea plant Camellia Sinensis. 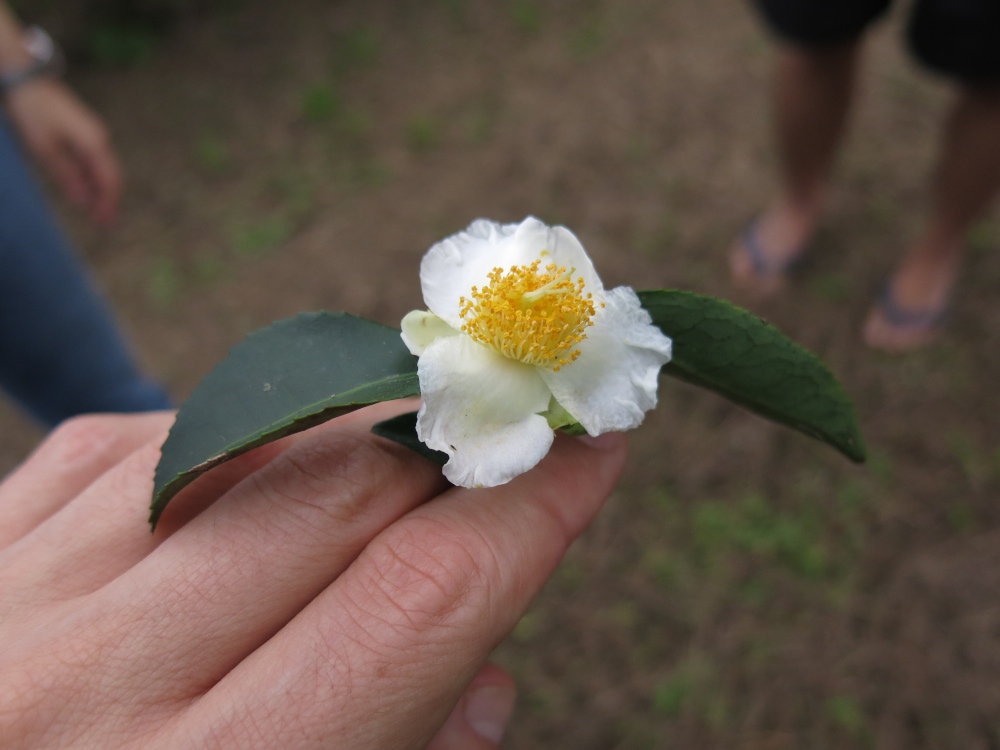 Of particular interest to me was to see a leafhopper. These are the tiny little insects that eat the leaves of the tea bush. In certain teas, such as the famous Taiwanese oolong Dongfang Meiren (Oriental Beauty) and the Honey Black Tea that we tasted at Ji Lin Tea Plantation, the buds are picked after the leafhoppers have had their meal. As a kind of defence mechanism the plant produces monoterpene diol and hotrienol which gives the tea its particular flavour.

The leafhoppers are actually tiny; just a few millimetres long. (I’d love to tell you that I shot this photograph but actually I just photographed the print on the wall of the tea tasting room. My zoom is not powerful enough!)

I very much like the taste of teas where the leafhopper has had his fill and was very pleased to discover Ji Lin’s Honey Black Tea. So yes, I bought a packet of that too. Here you can see the tea being packaged.

After a our tea tasting afternoon we went to the nearby Hong Ye Hot Spring. It certainly wasn’t the most beautiful or comfortable hot spring I have been to but it was, nevertheless very relaxing. (It is also the first time I have worn a s swim suit in a hot spring as it was mixed bathing. We had the entire place to ourselves. That’s Professor Chin in her spontaneously purchased 1920s style bathing costume in the background.)

The Pacific Ocean is actually only just down the road from where I am staying. There are plenty of houses in Hualien whose windows gaze on the sea all day long. Traveling a bit further south, you get to Jici beach. Here are 56 seconds of surf. The sand is black. Apparently this is a seasonal thing. In the winter the sand is churned up from the bottom of the ocean, colouring the beach black, but in summer the lower tide makes it gold. I like this idea of the sand changing colour like the leaves of trees.

There has been a surprising amount of press for Night Market Theatre which opened on 11th November. (Today marks the halfway point of our 5 day run.) So far there have been 4 television news features and 6 newspaper articles, many of substantial size. I think we are all a bit nonplussed by the level of interest in our modest little show. One journalist who is going above and beyond for his story is Kai-Ping Fang. Actually Kai describes himself first and foremost as a translator (his English is perfect, though he denies it), then a photographer, and then a writer. Having spent some considerable time with him (we’ve had maybe 6 separate meetings) I would say he was an artist. Kai has been commissioned by Performing Arts Review, the glossy magazine for Taiwanese performance, to write an article with accompanying pictures about my daily life in Taiwan. Actually, I think Kai is developing something more interesting than that, although he has photographed me having breakfast and going to the gym. I am looking forward to his photographs because I like his work very much. He shoots exclusively on film (he used 35mm movie film during our meetings because it has a better light contrast tolerance) and takes just 4 or 5 shots each time.

For 2 of our meetings, Kai took me to Le Flaneur, the cafe-come-photography-studio-come-leather-workshop of his friend Bin-Guo (known to his friend as Bingo). Kai had asked me if I liked coffee. I replied that I love the taste and the smell but that it upset my stomach. (Actually the second coffee travels down my alimentary canal my bowel is on red alert.) Kai argued that I wasn’t having proper coffee if it upset my stomach. After his explanation of bean selection and roasting methods I remained unconvinced. We placed a bet. If my bowel survived his friend’s coffee I would cook him dinner when he next comes to London. If it did not, then he would take me to dinner before I left Hualien.

Here is Bingo preparing a cup of single estate Kenyan coffee for me.

It took a surprisingly long time. He is dripping that water for more than 7 minutes. That’s for just 1 cup.

It was the first coffee I had tasted for maybe more than 3 years. It was delicious. I was however nervously awaiting an explosive outcome. That didn’t come. The following day I could gleefully report to Kai the perfectly solid, and actually improved, state of my stool! So now I owe Kai 1 home cooked meal. Although now I’m in a bit of a dilemma about the challenge of finding a non-combustible cup of coffee in London.

Le Flaneur is a bit like being in a cross between someone’s kitchen, a gallery, a craft centre and a library.

I particularly liked the range of different stools, all carefully chosen. This one was particularly comfortable.

There are also some lovely lamps.

This shade is made very simply from extremely thin slices of wood.

Before opening Le Flaneur, Bingo trained as an architect. These tables and benches are his own design.

And here is our little Night Market Theatre. Tiny as you can see. What was once selling bubble tea has been made over to sell one-to-one performance.

Once it’s all over and I have some proper time I will gather together some proper documentation. For the moment, here is a picture of the kinds of crowds that are cramming into the small alley in front of our curtain.