So here I am in Japan. To be precise, I am in a disused secondary school classroom, sitting at a long thin desk, staring at a green chalkboard that is divided by Chinese and Japanese characters into a lesson timetable above a bunch of empty wooden lockers. This is my studio. For the next two and a half months, this will be my office.

I have an artist residency at ARCUS Project, in Moriya City, in Ibaraki Prefecture in Japan.

ARCUS Project was launched in 1995. Its main activity is to invite four international artists each year, to make work here, providing travel, a studio, an apartment and financial support for expenses and materials. They also run a small series of workshops, lectures, concerts and film screenings.

I arrived yesterday, the last of the four artists this year. Paulien Oltheten (from Amsterdam) and Daniel Salomon (from Paris) arrived at the beginning of September. Kang Ya-Chu (from Taipei) has already been here for a couple of months and will leave in a few weeks. I would have come earlier myself but I had already committed to finishing my project with LIAF in the Lofoten Islands in the north of Norway.

The eleven hour, ten minute plane journey from London Heathrow, which arrived at Tokyo Narita yesterday afternoon was really absolutely fine. Flying with ANA (All Nippon Airways) was by far one of the nicest long haul experiences I have had. My penchant for ‘enjoying’ the airhostess security demonstration dramatically increased on witnessing the perfectly presented and delightfully formal ANA hostess, who gave a little bow before solemnly demonstrating how the seatbelt buckle fastened and unfastened. There was something in this formality which made this buckling suddenly far more complex that it really is and even I, who have buckled and unbuckled my airplane seatbelt countless times – and in fact had it buckled as I was watching the demonstration – found myself wondering precisely how the action was mastered. I have a feeling that this formalising of the everyday, this making a performance out of the most simple of actions, is going to be a theme of my time here and one, no doubt, that I will relish.

I settled back into seat 32H and was quite content to put up with a sleepless uncomfortable night in a coarsely upholstered seat. This ease was somewhat disturbed when I looked around to see nearly every third person had donned a disposable facemask. The Japanese are famously germaphobic but this still took me a bit by surprise. Had there been a recent outbreak of SARS in Japan? Just what wasn’t I protecting myself from? I was slightly reassured when the husband of the newly married couple sitting next to me, rolled his eyes when his wife opened her handbag, unzipped one of the sections, pulled out her multi-pack of disposable anti-severe acute respiratory syndrome masks and delicately put one on.

So then I decided to review the films ANA had on offer. My choice was Waterboys the recent Japanese comedy about a series of pupils from an all boys High School who form a synchronised swimming team! It was hilarious. I mean, it was meant to be funny but I’m not sure it was meant to be funny in quite the same way as I found it funny. I had to stop myself spitting out my salmon flakes on rice, I was laughing so hard.

As you will see from the advertising poster, the team seem to have thought bubbles coming from their swimwear.

From Narita I took a bus for just over an hour and a half, north to Tsukuba, a large University town and home of JAXA (Japan Aerospace Exploration Agency) which is basically the Japanese equivalent of NASA. From there I took the Tsukuba Express on the short journey to Moriya.

The Tsukuba Express is the new high-speed rail track that runs between Akihabara in Tokyo and Tsukuba. It is only three years old and has resulted in a sudden population explosion along its nineteen stops. It takes just 32 minutes on the express service to reach the capital from Moriya. Moriya up until quite recently was not really part of the commuter belt and is still surrounded by a lot of farmed land. For how long, is unclear.

As of March this year, the population stood at 58,012. One of the big employers here is the Asahi beer factory, which takes up a massive site in the centre of the city. It is an irony that despite its alcoholic credentials, there apparently isn’t a bar in the city! Of course you can drink in restaurants or at home but there is no place you go just to get a pint.

One of the results of the expanding population was that the city had to build a new High School and that is why ARCUS managed to take over some of the classrooms in the old school building, which now houses a community and cultural centre with a tatami room (for traditional dance classes), a sports hall, a ceramic studio, the small city archaeological collection and various other facilities, including a series of outdoor brick barbecues, which are apparently very popular. There is also a swimming pool full of water, which I was told is only kept in case of a fire! I guess that is a wise precaution because Moriya sits on a fault-line that has been the epicentre of several earthquakes.

I am living a short cycle ride from ARCUS (yes, my bike was waiting for me with my welcome pack on arrival). The space is small. Very small. And the front door looks a bit like the door of a jail cell. The bath is like a large sink. The sink is like an ice-cream tub. But it is clean. Very clean. 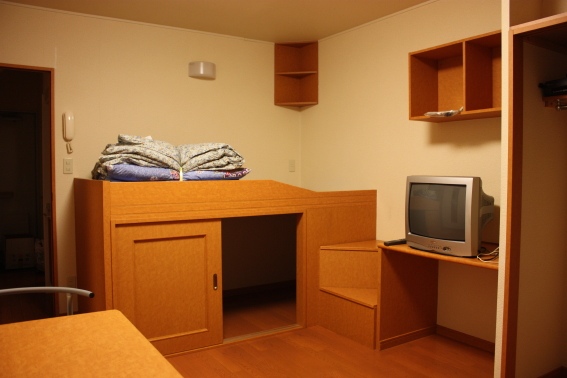 One major problem is that I have no idea what I am going to do here. The other artists are well on their way and have their project ideas all sorted (well they have been here for at least a month already). Initially I proposed to do some kind of participative project about garbage. The garbage schedule here is extraordinary. It really is a test to understand what is what. One of the main sections on the English pages of the official Moriya city website is given over to garbage collection. Take a look:

Here is the red bag for ‘burnable’ waste. And yes, that really is a space for writing your name. You are named as being responsible for your rubbish right up until the moment it is collected.

I have been to Japan before for two weeks of meetings in Tokyo, Yokohama and Kanazawa. I had an incredible time but it was mediated by the fact that it was so short and everything was timetabled out. This is going to be a different experience: longer, slower and probably more lonely but I hope it will be a positive experience to remember for a long time to come. One way or the other, I’ll try to blog every week or so and let those of you that are interested know what is happening.