And so to my final post. I am writing this entry with only two more nights in Japan. If everything goes according to plan, I will be in the UK by the end of the week. I still haven’t packed a thing. Despite not buying any clothes I seem to have amassed a good extra suitcase worth of stuff in the last two and a half months. (What? No clothes? None at all? And to think that you went from XS to M overnight and you didn’t even bother to take advantage of the situation!)

The majority of the last two weeks have been spent in my library in a range of different posts – but mainly as librarian and waiter. It has been very nice to see the space being used.

The reactions have been generally very good. Children seem to love it. There has been more bewilderment than I had expected. I thought that it was quite an easy project to understand and encounter. Some people walk through one door, see me sitting at my desk and walk straight through the other door, looking for the ‘art’ and not understanding what this ‘office’ is doing in the middle of a studio.

The Rubbish Library / Library Rubbish events have helped to activate the space.

Champagne Reception
Saturday 6 December 7-7.30 pm
Do you work in the garbage collection or recycling industries? Then you are welcome to this exclusive private view of the Rubbish Library / Library Rubbish. You will be given the chance to browse the shelves of the library while sipping champagne.

Well despite quite a bit of cajoling, no rubbish collectors showed up. There I was in my bowtie and apron with the beautifully hand crafted champagne cups made out of plastic green tea bottles, forlornly waiting for guests that never arrived.

To be honest, we pretty much knew that this was a step too far for Moriya but it was still disappointing. The piece operated for the art crowd who showed up for the opening, insomuch as during those thirty minutes of the evening, if they tried to get into my piece, they were asked if they worked for a garbage collection or recycling company and were turned away when they responded in the negative.

Traditional English Afternoon Tea (with specially imported Fortnum & Mason Earl Grey) was however a sell out.

The table layout was all made out of recyclable stuff. Even the cushions were bin bags with packing material stuffed in them.

I donned my bowtie a second time to serve a kind of watered down version of what I once had on an awful afternoon in the Ritz.

Despite several years of silver service training and practice, I could not negotiate my way behind the guests in the narrow Rubbish Library / Library Rubbish and was excusing myself over and over again as I stepped on people’s toes with hot tea in hand. It was more Fawlty Towers than Piccadilly. It was terribly bizarre. It certainly had the effect of enticing into ARCUS some of the Moriya ladies of leisure, which was my intention.

I was determined that the service for the Rubbish Library / Library Rubbish Hotel should be truly silver.

I cannot tell you how much organisation it takes to run a hotel. Even if there are just two guests and it is only for one night! (Although this was advertised as running for the duration of the installation, we were only ever going to do it once. It was too expensive and way too much effort to repeat it.)

I was determined that we shouldn’t have and art world couple and despite the gallery goers being by far the most numerous would-be guests, we offered the night to Mr and Mrs Shimoda from Yokohama. We don’t know very much about them but it was rumoured that he is a decorator and that they are interested in art.

After a brief artist’s talk from me, Mizuki gave them a tour of the building and the other two artists’ shows. Daniel and Paulien were plied with beer and asked to stay to answer any questions. (Daniel Salmon has issued a currency as part of his residency here – the Mono – new ‘Esperanto money’. Paulien Oltheten has been making photographs and video of half found half contrived everyday ‘happenings’ around Japan. Their work is intriguing, funny, thoughtful and beautiful.)

And then it was dinner time.

Junko Ito (who ardent followers of this blog may remember escorted me to the doctor and informed me that I had pneumonia) is a fantastic cook (as well as being a painter and costume designer) and after some collaborative discussions, she created a nine course chromatic extravaganza, from white to black, for our guests.

The costs of the ingredients alone were more than Mr and Mrs Shimoda paid for their night of luxury. For the foodies among you, here is the menu.

And here is a picture that doesn’t do the plates any justice at all.

It was pretty spectacular and the leftovers that us workers got to taste after the guests had dined, were truly delicious. I was trying to give the food the best possible platform and employed the most formal ‘Opera House’ dining service that I could remember.

I took the plates on the cardboard tray up to the

At the end of dinner, it was the cabaret. I sang three songs, with the costume change merely requiring I remove my apron. Funny Valentine, How Do You Keep the Music Playing?, and Rudolf the Red-nosed Reindeer. The final of these, was learnt and sung in Japanese. Oh yes, makka o no ha na no!

After that it was a quick set change and time for the Shimodas to hit the sack.

The following day, with my eyes red as Rudolf’s nose, I cycled the fifteen minutes to ARCUS to make them breakfast in the ‘salon’.

They went home very happy and left us happy too. And now we all have some time to think about what it all really means! The idea with all these events, was to activate the space in a way not normally associated with either libraries or rubbish dumps and to push some of the conceptual frame of the installation a bit. It will take time to make full sense but it was a really great thing to have tried.

The final event was the Book Wreck.

Book Wreck
Sunday 14 December 5pm-7pm
Have you been annoyed by something that you have read? Do you despair at how some things get published? Are some words not even worth the paper they are printed on? Why not come and take out your frustration on one of the Rubbish Library / Library Rubbish books? On the last day of the ARCUS Open Studios you will be invited to rip, tear, punch, kick, smash, whack and batter the books. (They will then be officially sent to the paper-recycling centre, where they will be shredded and pulped and hopefully become something better instead.)
The Book Wreck will be on a first come first served basis. No booking required.

The intention here was probably quite clear: the book is supposedly sacred; libraries are about preserving them; in a world of decreasing natural resources what is the status of the paper publication, etc., etc. Actually I had wanted to give the books away, with the idea that they would have another life but I was strictly told that they would have to be returned to the paper recycling plant. They had been thrown out by the citizens of Moriya in the expectation that they would be destroyed and destroyed they must be. So I thought we could start by giving a little helping hand.

Unsurprisingly, this was popular with kids too.

Here is Mizuki, the Director of ARCUS destroying a book.

This guy decided to disrobe for the occasion.

And there was quite a lot of throwing torn books up into the air. 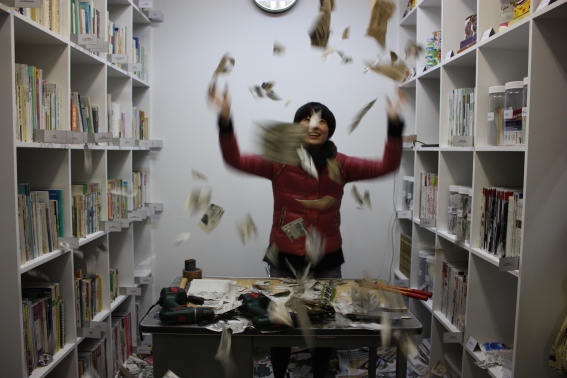 There was a big audience in a small space to start with but then by the end, there was just me and this lone guy, who tossed Dante’s Divine Comedy (in Japanese) into the ether.

And so that is it. My rubbish is now ended. It has been an extraordinary rollercoaster of a journey here in Japan, from sashimi to sick bed. It will be one that I will remember for the rest of my life.

Thank you for reading.