This week I have had a golden gay time.

Perhaps it would help with capitals. This week I have had a Golden Gaytime.

This Australian favourite, a survivor from another ‘ice age’ (okay, 1959), really does taste of the olden days. I don’t know quite why, but I get a similar sensation with particular brands of soft marsh mallows and liquorice allsorts. Its as if this particular sweet taste, that has been delighting people in the same way for decades, can somehow transport you back in time. It’s a kind of false memory syndrome because you ‘remember’ a time of which you could have no living knowledge as it precedes the moment of your own birth. (All this from one ice-cream on a stick.)

Advertised as ‘ICE CREAM WITH COMPOUND CHOCOLATE AND BISCUIT (14%)'(why does that word ‘compound’ seem so out of place?) a Golden Gaytime is a toffee and vanilla centered ice-cream sandwich, rolled in pieces of broken biscuit. It has the comfort and sweetness of condensed milk.

The name is clearly a survivor from a less politicised day.

Names have preoccupied me this week. Coming from the UK to Sydney, you are aware at how the map of England has been redrawn: Hoxton, Enfield, Kings Cross, Oxford Street, Balmoral, Hyde Park. As must have been pointed out by a thousand thousand tourists, the list goes on. But I had a strange moment of familiarity traveling out to Western Sydney for a meeting this week, when the train pulled into Croydon.

Croydon was the town on the outskirts of London that my Grandma lived in all my life, until her death aged 98 in January 2010. For years I would go and visit her by train, and pulling into Croydon station Sydney filled me with a strange heartache. This time the memories were real.

By way of an aside, the trains here in Sydney are genius. They are double-decker for a start, which is very exciting, but even more so, you can change the direction of the seats with a gentle tug on the conveniently placed handles. So you can choose to face in the direction of travel, or create a banquette with your traveling companions. The whole mechanism is sprung, so the maneuver can be made with very little difficulty. This should be standard on all trains.

Of course the names of the stations (and the streets, parks and districts) are a continual reminder of the colonial history here in Australia. This was emphasised for me this week in discussions with Performance Space Director Daniel Brine about whether or not there should be an Acknowledgement of Country before my artist’s talk.

Acknowledgement of Country is the (now standard) way in which public meetings are opened. These statements offer themselves as a kind of reconciliation. For example:

I would like to acknowledge the Dharug people who are the traditional custodians of this land. I would also like to pay respect to the elders past and present of the Dharug nation and extend that respect to other Aboriginal people present.

My feeling on first hearing an Acknowledgement of Country was that it was a kind of apology that ‘normalised’ the colonial history, as in, ‘everything is OK because we acknowledge injustices have taken place’. (Complaining to my elder sister that she is useless at being in touch, her response: “I know; I’m crap,” produces a kind of stasis. It’s as if her acknowledgement of her crapness forestalls any change of behaviour.)

But I have now come to understand Acknowledgement of Country as a necessity, as something that just has to be done. Australia is young; Aboriginal and Torres Straight Islander peoples have only had citizenship for 42 years. Many wounds are raw.

In the end we decided that it wouldn’t be a necessity for my talk. It is an established etiquette for meetings rather than presentations. Here is my name, on a blackboard outside the Performance Space Clubhouse.

It was okay. I wasn’t at my best. People were kind. But I’ve got much more into the swing of my research this week and the meetings have all been productive and interesting.

Messages from home have often contained the question: have you seen any nature yet? Well, not really in the way that you mean, no. But I did see this amazing ‘Gustav Klimt’ leaf on my way to the gym on Tuesday. 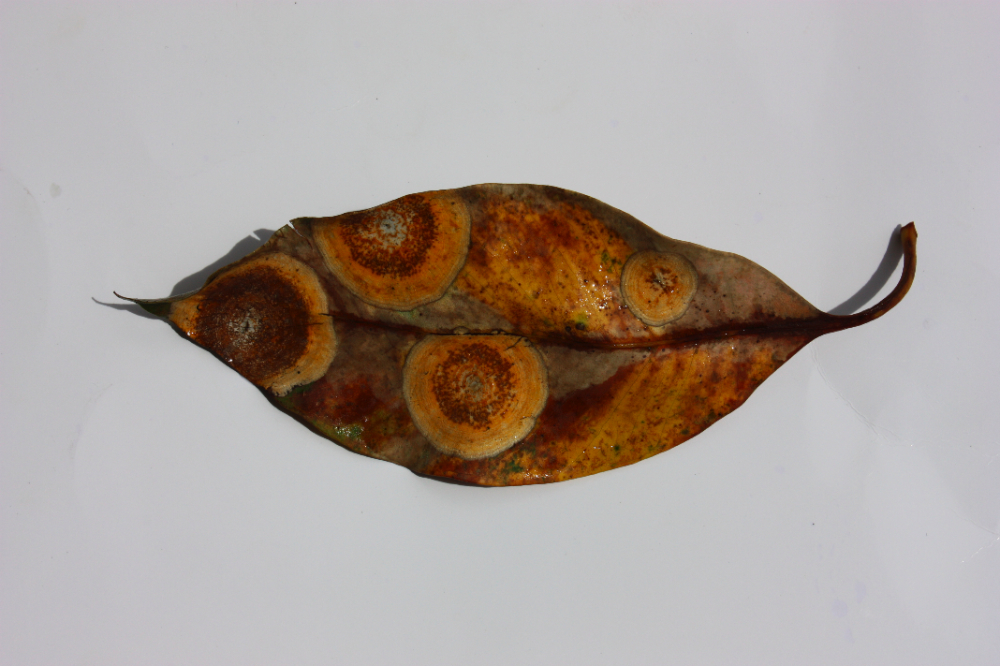 This is an example of nature imitating art.