My last hours in Rio were spent with a packet of disposable toilet seat covers in a variety of ‘sanitários’. I don’t know if it was the soaring heat (which reached 42 degrees), the incredibly rich salted cod fish risotto, or the permanent beat of the samba, but something done me in.

Clutching a scrap of paper on which were written the cobbled together instructions: ‘Eu gostaria de alguma coisa para diarréa’, I went to the nearest drogaria to try and get something to block up the flow for the ‘executive’ bus trip back to São Paulo.

Rio is truly an extraordinary city and Carnaval is probably the most loony thing I have ever enjoyed but arriving back at Tieté bus terminal, without so much as a paper streamer or novelty hat in sight, I couldn’t help but feel a bit more, well, relaxed. São Paulo is silent. It is the oddest sensation. This teaming megacity has suddenly just paused. Carnaval in São Paulo seems to mean ‘less’ rather than ‘more’.

Back at Débora’s I begin to think about packing my case and about what the year ahead holds. Already two months in, really it feels that returning to the UK will mark the beginning of my 2010.

We threw a small ‘gyoza’ party for some of the people that have been so kind and helpful to us while we were here. As my own contribution, I made…

I didn’t have a recipe as such, amalgamating a bit of web-Nigella-web-Delia but I did have two ‘special’ ingredients.

To be honest, I don’t know if this did anything. Further internet research indicated not to replace wheat flour entirely with banana flour, so I used half and half.

This was a huge disappointment. I was expecting a creamy pale yellow puree but the thing plopped out of the can clean, a firm brown jellied disc. In the end I mashed only a tiny bit into the mixture, using ‘real’ bananas instead. 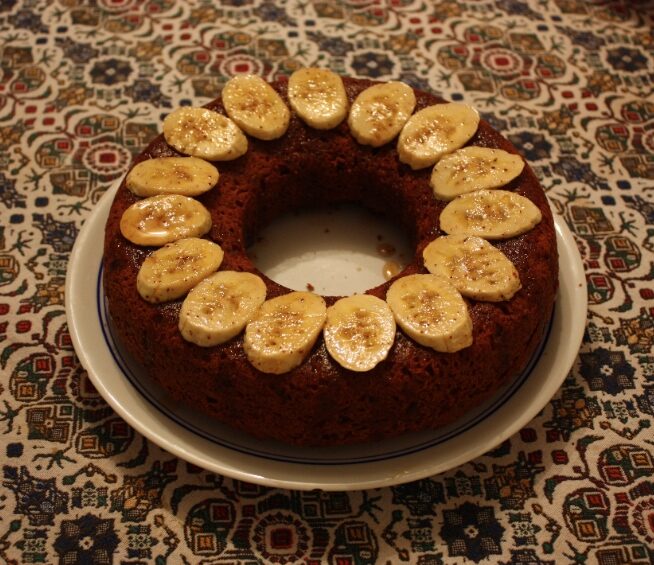 Well, it was a bit dry. Not disgusting. But only one of the party went for a second slice.

Of course you can buy them from racks in the local supermarket but they aren’t any cheaper (they barely could be) and the range isn’t as good.

Havaianas are quintessentially Brazilian, even if they are named after the 50th US state. Everyone wears them, from the ladies who lunch to the catadores who collect, these foam soles cross the economic, racial and social spectrum, their rainbow shades reflecting the nation.

My strict ‘family only’ policy (albeit with a marginally extended notion of what ‘kin’ means) still meant purchasing 16 pairs. If you have received a request for your shoe-size then imagine yourself stepping into these. If you haven’t, I’m sorry; I truly would love to be able to buy Havaianas for everyone.

I’m sure that some of you will flip at the imperfect fit and that others will consider my colour selection a flop but when they work, they are extremely comfortable. I’ve been wearing mine non-stop. (That will have to end. In exactly a week after this posting I will be in Helsinki which I note is currently -18. A 60-degree variation that I am hoping won’t be too much of a punishment.) If the UK summer never comes, you can always use them as ‘shower shoes’ in the swimming pool.

This trip to Brazil has been unforgettable, for the saddest of all reasons, the death of my beloved Grandma, as well as for the fat papaya, feathered headdresses, fantastic architecture and my forays into the rubbish bins.

I am not surprised that the British Council wants to forge links with Brazil. We hear a massive amount about China and India but Brazil is a country with extraordinary natural resources and a 200 million strong population who also want a slice of the pie. As I have witnessed first hand, it is already a world leader in the recycling of waste, which, with our current environmental predicament, makes it the future. It will be interesting to see how they manage the Olympics in 2016. No doubt their desire to host that circus, so shortly after China, is to show they really mean business on the world stage.

As I close this blog once again, I wonder when I might come back here to Brazil. The Artist Links Manager, Roberta Mahfuz, mentioned that they are looking at maybe an “eight year return” by which she meant that it might only be in just under a decade that the fruits of these exchanges between the UK and Brazil produce fruit. I hope I get to taste the fat papaya again before then.