If your image of Portugal is of small stout middle-aged ladies in cardigans with brooms and budgerigars then you would, at least in part, be quite right. Dona Jacinta, who manages the building I am staying in, is constantly sweeping the wood effect linoleum in the entrance hallway, accompanied by the chirp of her caged budgie that tweets through the open door of her apartment. The enormous white cat that sleeps on a stack of cardboard boxes at the bottom of the communal staircase is so overfed that he barely twitches a whisker. 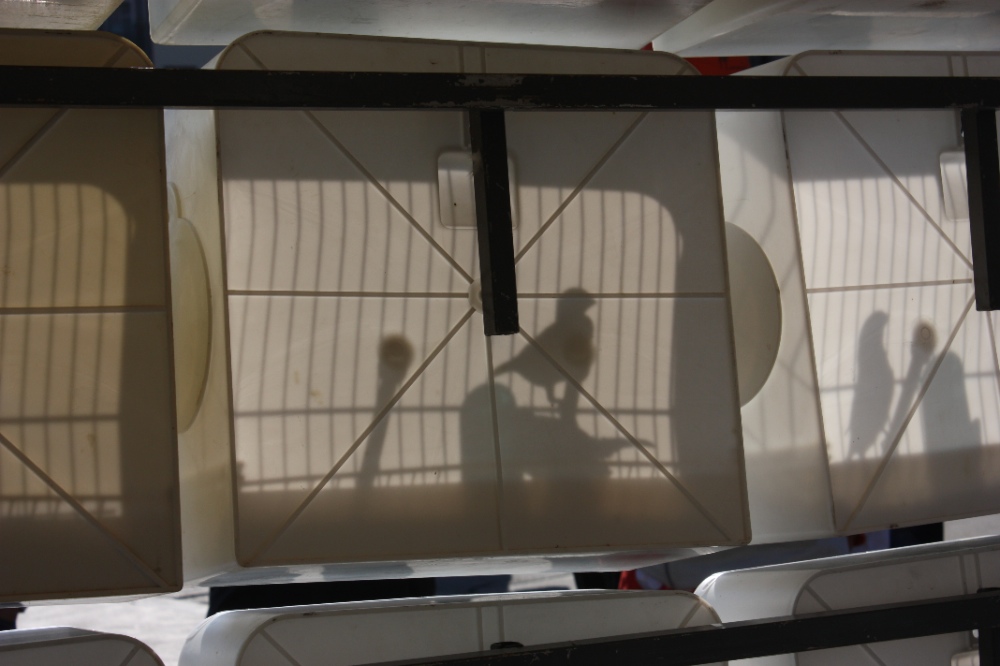 Perhaps fat white tom should have strolled up the road with me last Sunday. I planned a trip to Braga, a town an hour away from Porto described as ‘the Rome of Portugal’ because of its number of religious buildings and monuments. Walking to the train station I was gradually overcome by the sensation that something unusual was going on. There was the oddest noise in the air. A mass of high pitched audio interference, a kind of singsong screech. It was only when I got to Campo Mártires da Pátria, the esplanade in front of the old prison and courthouse, now a photography museum, that I realised what was going on. The ‘bird market’ had come to town. The sound was of hundreds and hundreds, if not thousands of feathered warblers all (with a few notable exceptions) caged next to each other, singing desperately for a new owner (or so I liked to imagine).

Although most of the birds were of the stout middle-aged lady kind – small and colourful – there were also big parrots, peahens, exotic birds that I have no idea about naming, ‘working’ hens and guinea fowl.

It was a multicoloured feathered congregation that ranged from the utilitarian to the decorative. There was also a vast array bird accessories to choose from, including an enormous selection of cages.

The pigeons looked very confused. They nevertheless took the opportunity of scampering around underneath the coops gobbling up the stray seeds that had fallen out from their cousins’ breakfast bowls.

Before I leave the ‘unusual market’ theme, let me briefly mention the flea market that I also visited this week. Well, it was only partly a flea market. It was also a disco and a bar, all in one room: Maus Hábitos, an alternative ‘arts’ space on the top floor of a car park in the centre of town. If you look carefully at the first of these two photographs you can see the DJ (in a red t-shirt at the back) spinning the tunes. It made for a great atmosphere, with people dancing, drinking and shopping all at the same time. Great idea.

As an aside to this aside, there was an interesting (but unexplained) case on the wall with itemised cigarette butts in it. Of course, this appealed to my fascination in collecting habits and the status of garbage.

And so back to my day trip to Braga, 53 km north east of Porto.

Braga is renowned as one of the most beautiful cities in Portugal, for being deeply Catholic and very conservative. Without any map to guide me I followed the arrow that pointed to ‘Centro’ and found myself, almost immediately in the most important monument of the city, Sé Primacial, Santa Maria de Braga, the Cathedral. Unlike any other place of worship that I have visited as a tourist, this one was absolutely packed with Sunday worshippers. Hoards of well-dressed couples genuflected at the altar before streaming out into the square.

I just had time to snap the extraordinary baroque organ before being shouted at by a steward in a comedy purple and red 16th Century outfit with matching peaked hat and plus fours and the incongruous addition of 1980s Tootsie glasses. A conglomeration that looked something like a mixture of these:

The cathedral is full of reliquaries and tombs of the beatified including the relatively recently interred Irmã Maria Estrela Divina, who I can’t find much about but it seems she was witness to various miracles.

(I had a standoff with a couple of devotees as I was waiting to take a photograph in her chapel. Having been ticked off by the steward for photographing the organ, I thought I should wait until I had the room entirely to myself. As I was sitting on a seat opposite her tomb, a couple came in, touched the monument, kissed their hand, genuflected and waited. After some time it became clear to me that they weren’t going to leave until after I did because they didn’t want to be outdone in the time they spent giving contemplation to holiness and prayer. I put them out of their misery by leaving the chapel and hiding around the corner. They left immediately after me and I went back in to take my photograph.)

After this ecclesiastic beginning, I thought I should head off 5 km out of the centre to Bom Jesus do Monte which is a famous pilgrimage destination and one of the most impressive architectural sites in Portugal. A brief stop at the Turismo centre in the central square sent me in the right direction.

Although I had seen pictures of Bom Jesus, nothing quite prepared me for the experience. You arrive at the bottom of the first giant staircase that takes you in sections through the mountain. At key points there are chapels, which looks something like the summerhouses of English country estates. These are, in themselves quite substantial structures.

The chapels are dedicated to the Via Crucis (or Stations of the Cross) and each building contains a life-sized terracotta statue scenario of a moment from the Passion of Christ. As your eyes strain from the bright sunlight and you peer into the half-light of the chapels, the scenes hover like a kind of apparition.

After climbing this first staircase for sometime, you make it to the bottom of the second. It is here that the views both of Bom Jesus on one side and the city on the other are awe-inspiring. The monumental baroque staircase zigzags up to the sanctuary at the top.

At each landing there is a fountain dedicated to a sense – sight, sound, smell and taste – each orifice pouring forth an eternal stream.

In the sanctuary itself the altar is relatively unusual in depicting the whole of Calvary with Jesus, the two thieves and extras in a life-sized tableau.

Although more tourist attraction than working Catholic institution, you do get some sense of what it must be to have a ‘religious experience’, especially when you learn that many pilgrims choose to climb all those stairs on their knees. If you don’t fancy that you can always take the funicular, which has been working consistently without any accidents since it was installed in 1882. It is the oldest funicular in the world that works with water counterbalancing. When the car is at the top, the tank is filled with water. It gets heavier and thus moves down hill, dragging the other car up the hill as it does so. Brilliant.

Back in Braga, I wandered around the mass of religious and civic sites of the old town and witnessed the way in which these architectural histories are part of the living life of the citizens. As I observe a man determinedly praying at the outside chapel of San Bentinho Hospital, appealing for divine intervention in the care of someone sick, even the cynical atheist in me appreciated the consolation found in faith.

It was then, with renewed vigour that I returned to Porto and to Viver a Rua, in my own bid to leave a permanent legacy on the streets of this beautiful country.