As part of my residency in Copenhagen I am experimenting with porcelain in the workshop of ceramicist Christian Bruun. It is hard to imagine a kinder or more patient mentor.

Christian has been working with clay since he discovered the ‘clay room’ in kindergarten. His output loosely falls into four categories: creator of hand thrown functional ware, designer of large-scale planters, teacher, and collaborator with craftspeople in Vietnam where he makes giant decorative pots. “When I sit and do nothing I regard myself as an artist,” he jokes. 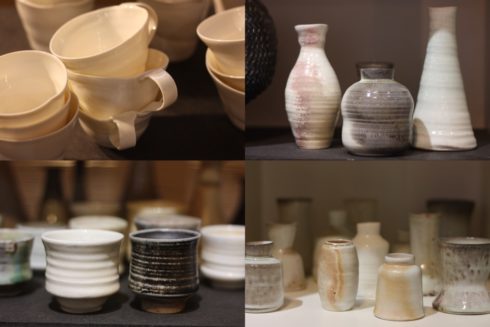 The separation between ‘art’ and ‘craft’ has always been fraught, at least in the West. Even when he is producing objects that serve no direct utilitarian function he has come to expect that they will be regarded as lower status. “Working with clay, we are always aware of the hierarchy, because we are at the bottom.” He cites the huge discrepancy between the value of a Picasso painting and a Picasso vase as an example. “It was never like that in Japan,” he says. Perhaps painting has been offered so much status in the Western canon because of its service to religious iconography, and therefore is seen as closer to God. Perhaps it’s just easier to put something on your wall. 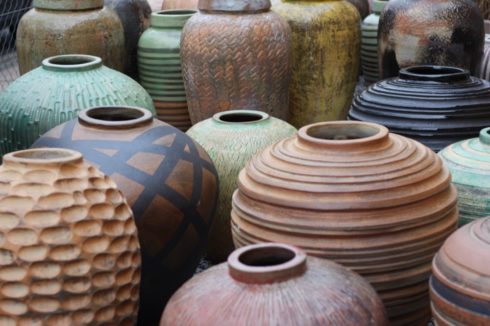 What I had not really thought about was how much physical labour there is for a ceramicist. Lugging around bags of clay, kneading, stacking kilns, shifting giant pots. Christian describes how his body, and those of his colleagues, are worn out from years of pushing, pulling and twisting on joints and muscles, made harder by the reduction of their lung capacity from inhaling ceramic dust.

I had also not really thought about how much engineering is involved. To keep pots the shape you want them, to exert some control over the vagaries of heating something up to 1350 degrees celsius, to stop things breaking or sticking together. A recent commission Christian is working on is for a series of giant planters for the new Architectural Association building in Copenhagen. The pots are massive. They all have to be the same size. They all have to maintain a good round shape. And… the client also stipulated that they should be on wheels. An ingenious solution was to knock out the bottom of the pot and replace it with a steel clamp mechanism on casters. 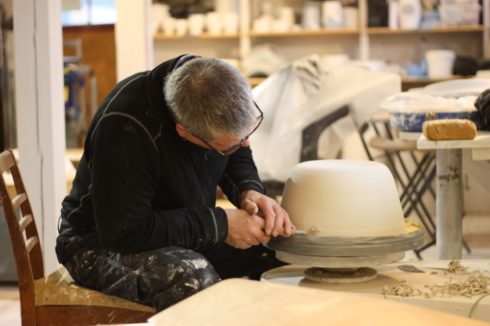 It has long been a desire of mine to spend some time with clay. Despite working with all sorts of sculptural materials it has been many years since I twisted open the tie, pealed back the plastic, and dug out a fistful of fine-grained earth. 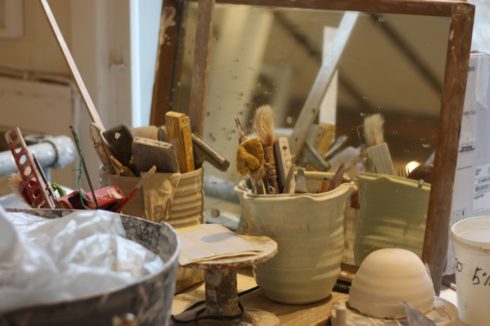 The workshop is a paean to possibility. I want to try everything. But my time is limited and I have a project in mind. Of course I’m not going to become a ceramicist in two months, and that certainly isn’t my intention. I want to think about the lives the noses in the Nasotek might lead, when the doors of the Glyptotek museum shut for the night. And I want to imagine that in porcelain.

And while I work on my noses, Christian and the other users of his workshop, many of whom attend his weekly throwing class, are spinning the wheel to make vessels, which slowly dry out on racks. 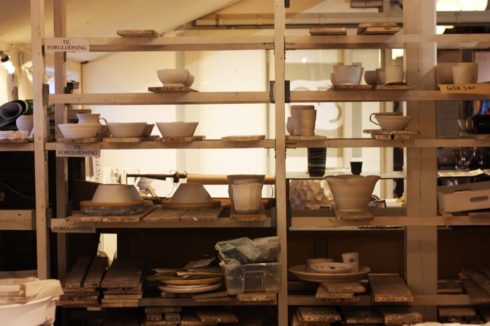 One thing I probably won’t be experimenting with is glaze. The boxes of powders are extremely tempting but I have to keep my unglazed noses to the grindstone. 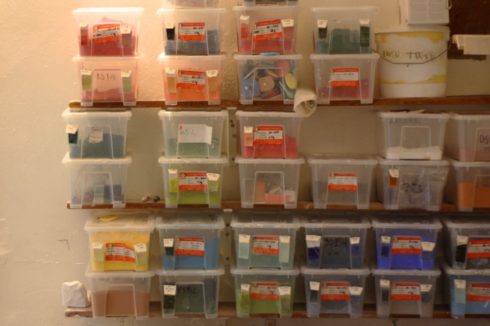 The glaze samples are displayed on tabs of fired clay and hang on a board. Even in themselves they are extremely satisfying. 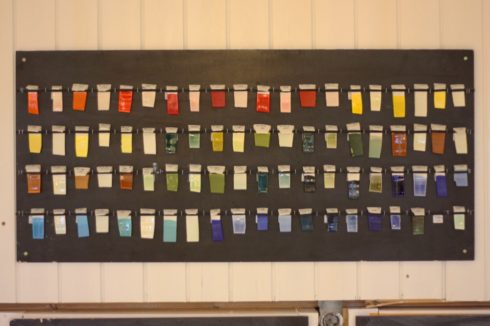 I tag along with Christian as he makes the four hour drive from Copenhagen to Herning to collect some pots which have been in an exhibition. On the way we stop at Guldagergaard, the International Ceramic Research Center in Skælskør. They offer artist residencies, educational programmes, studios and exhibitions. Christian was one of the founding members of the organisation and uses the wood fire kilns here two or three times a year. 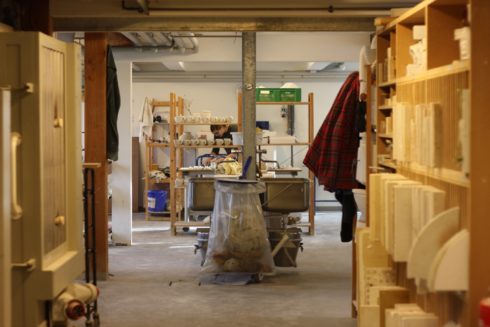 The main reason we paid them a visit was to see the amazing way in which Eglė Pakšytė, a former Kiln Technician from Lithuania, decided to create the glaze samples. Christian knew I would be extremely excited to see the hundreds of press moulded dog noses that she made to demonstrate the variation of colour and effect. This project of accumulation represents hours and hours of work. As well as making the noses, Eglė has carefully annotated which nose is made of which clay, what glaze was given to it, which kiln it was fired in, and where in the kiln it was positioned. 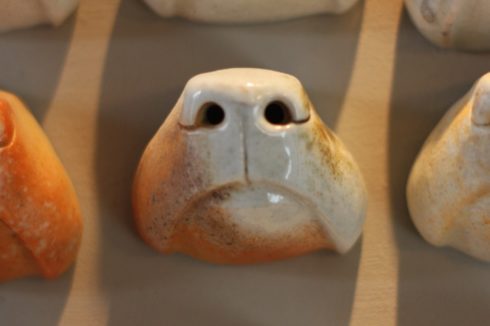 Created in order that ceramicists using the facilities would better be able to determine glazing techniques, a highly utilitarian proposition, this collection is nevertheless full of resonance. Repetition and difference are key motifs in art practice. She offers them with absurdity and imagination. Christian and I continued our conversations about the place where craft meets art, triggered by the status of these wonderful ‘glaze samples’ that for me at least, could not escape the label ‘art’ even if they had wanted to. 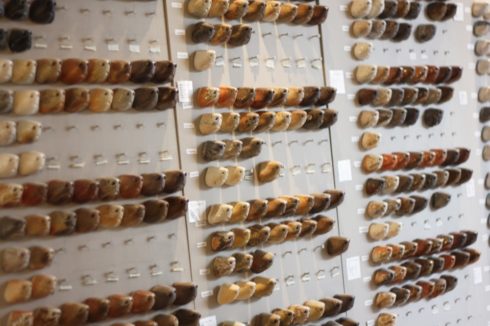 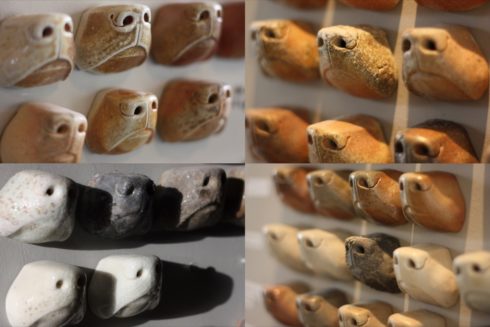 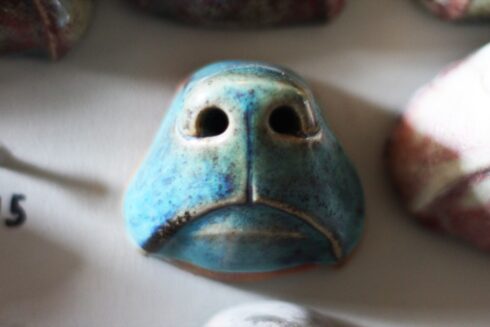 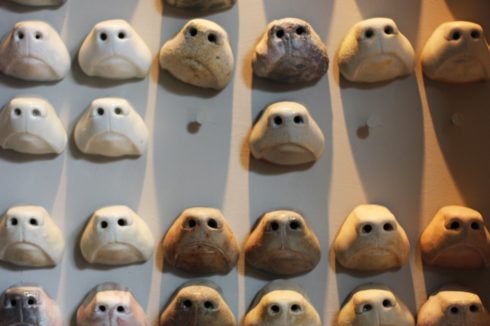 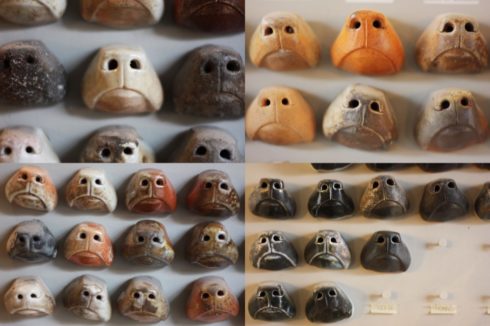 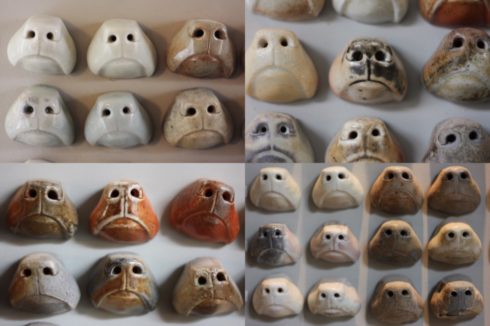 I’ve heard many art critics and academics define art as anything that the artist designates as such. For my own part I’ve always considered art as being something in the eye of the beholder and I haven’t really cared whether people have thought of what I do as art or not art. I’m more interested in what it does than what it is. As we walked out of Guldagergaard I caught sight of the clay waste bin, where unusable, overworked, or dried out clay is dumped. Caught in the low Nordic light coming through the window, I couldn’t help but think that these scraps too had their own integrity and that their step towards art was close. 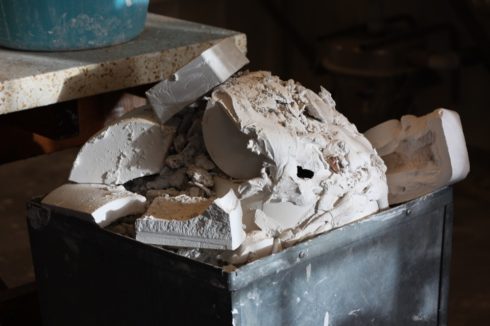 It was very exciting to open a kiln for the first time in my life to see my own scraps. My early experiments with porcelain. I want them to feel like lost pieces, ruins that once belonged to something else, barely recognisable scraps that nevertheless stare up at you. Odd little things that may, or may not, be art. 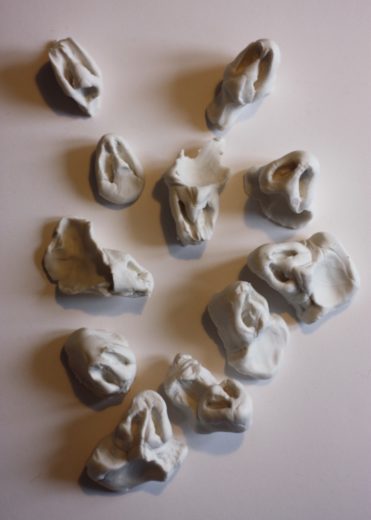