I took a long weekend off and a one and a half hour plane journey to Melbourne. Almost certainly I wouldn’t have made this trip had it not been for the fact that I had been invited to stay as a guest of my friend Andrew Carcelli, who I had not seen for 16 years (or heard from for 15).

As my one personal connection in Australia, I did a little Googling to track him down and an email to his former employer was happily forwarded.

In 1994/5 Andrew was travelling around Europe, and we met behind the bars and in the private dining rooms of the ENO (English National Opera) at the London Coliseum, where we were both working. It wasn’t long before we were close friends and that four of us (Andrew and his girlfriend Gitte Hansen from Copenhagen, Ben Zühlcke, now long standing friend of mine, and I) were all living in a one-bedroom flat in North Lambeth (a flat I was later to tenant and eventually to buy).

It was a heady summer. We were all just over the cusp of adulthood. It was pretty much a case of anything goes.

Andrew returned to Australia and in those pre-email days it wasn’t long before we forgot to be in touch.

I flew out of Sydney on the 11 o’clock flight on 11.11.11, a fact that was not lost on the Virgin Australia ground staff team member as she giggled her way through the boarding announcement. It was not lost on me either, being as it is, a fitting time for reflection and remembrance.

Standing at the gate of Melbourne Airport it was difficult to look at Andrew and see a decade and a half of change. It seemed like 16 weeks had elapsed rather than 16 years. The real change came when we arrived at his home, and I met his partner Tara and their two children, Maya (7) and Luca (4).

Of the various encounters that Andrew arranged for me over my three-day visit, special mention has to be made of the trip to Hanging Rock. This was an unexpected treat, as I had no idea that it was driving distance from Melbourne and if I had thought about it would be the very place (perhaps in the whole of Australia) that I would choose to visit.

Hanging Rock, the place where “history and mystery meet” (that is according to the Macedon Range website) was made internationally famous by Joan Lindsay’s 1967 novel, and Peter Weir’s subsequent film Picnic at Hanging Rock. Geologically it is a mamelon: a rock formation created over 6 million years ago by the eruption of thick lava through a narrow vent in the bedrock. As the lava is not fluid, it does not flow away; instead it congeals around the vent, forming a small hill or mound on the surface. The outflow from successive eruptions forms additional layers on top, and the resulting pile of layers stand over 100 metres above the surrounding surface. As Hanging Rock’s magma cooled and contracted, it split into rough columns. These weathered over time into the many pinnacles that can be seen today.

The film Picnic at Hanging Rock (Australia’s first international hit) tells of the disappearance of three girls and one of their teachers from Mrs Appleyard’s private boarding school during a disastrous picnic at the rock on St Valentine’s day 1900. It was released in 1975 and I must have watched it when it was first broadcast in the UK in the late 70s or early 80s. I will have been no older than 10. It made an extremely powerful impression on me. So much so in fact, that I remember, despite being an extremely reluctant reader at the time, I picked up the book (possibly from my elder sister’s shelf) and worked my way through the 200 or so pages, desperate to try and untangle what had happened to Miranda, Irma Leopold, Marion Quade and their mathematics mistress Miss Greta McCraw.

It was with the same sense of curiosity that I searched through the shelves of Melbourne’s second hand bookshops to find the identical edition that I had read nearly 30 years before. I am quite certain that some of you will recognise the cover. 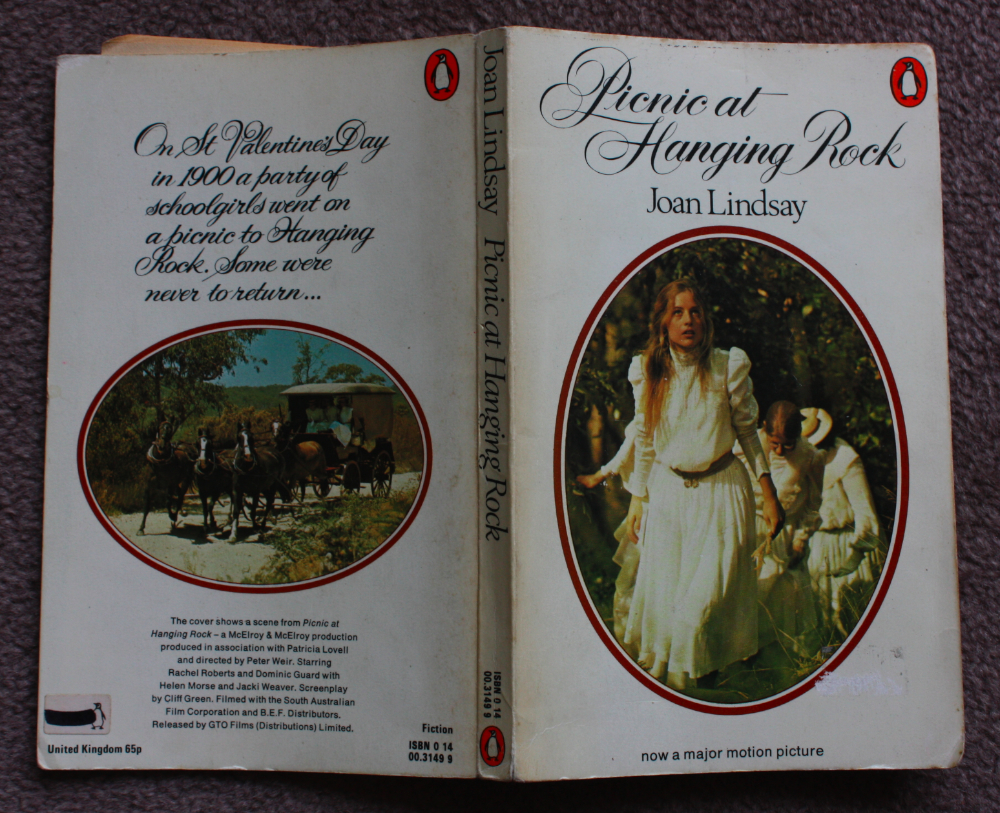 Perhaps it is best left to Joan Lindsay to describe the site that meets your eye as your carriage enters the plain on which the rock stands.

While they were talking the angle of vision had gradually altered to bring Hanging Rock into sudden startling view. Directly ahead, the great volcanic mass rose up slabbed and pinnacled like a fortress from the empty yellow plain. The three girls in the box seat could see the vertical lines of the rocky walls, now and then gashed with indigo shade, patches of grey green dogwood, outcrops of boulders even at a distance immense and formidable. At the summit, apparently bare of living vegetation, a jagged line of rock cut across the serene blue sky.

As the vertical facade of the Rock drew nearer, the massive slabs and soaring rectangles repudiated the easy charms of its fern-clad lower slopes. Now outcrops of prehistoric rock and giant boulders forced their way to the surface above layers of rotting vegetation and animal decay: bones, feathers, birdlime, the sloughed skins of snakes; some with jagged horns and jutting spikes, obscene knobs and scabby carbuncles; others smoothly humped and rounded by the passing of a million years.

We climbed the tarmac path, past the warning signs.

It really would be too dangerous without some intervention, especially in today’s litigious culture. There is at least one plaque to a fallen child.

At the top, I was a bit concerned that Luca’s bravado jumping was testing all our catching skills. The ‘safety features’ are actually very minimal and it was remarkably easy to enter into the mystery once more.

As Tara unwound the tale to seven year old Maya, the child’s ‘what?’, ‘when?’, ‘how?’, ‘why?’ interrogation, allowed us all to re-examine the facts as they have been presented.

The place is definitely special. A giant’s petrified spew in an otherwise flat landscape. The faces of rocks stare back at you.

No wonder so many people fear it as a dangerous place. It certainly is atmospheric.

Although we had already eaten, I forced down an orange ice-lolly, just to have had a picnic at Hanging Rock at the same place that Miranda had eaten the fruit jelly, just ahead of her misadventure.

The trip took me back beyond the fifteen years since I had been in contact with Andrew to a time fifteen years before that, as a child in Edinburgh, and the development of my own imagination.

Enough of the rock.

Back in Melbourne, Andrew took me to the State Library of Victoria. If ever books were ready for the opera, it is in the ornate buttressed balconies of the La Trobe Reading Room.

One the plane back to Sydney, the abstract expressionist sunset, the picnic at Hanging Rock, especially after last week’s Klimt leaf, got me thinking once more of how nature imitates art.