This week has been rubbish.

It started off with good rubbish and another meeting at City Hall. Whereas in the UK you would hit off an email and wait for a reply, here everything is done through face-to-face meeting. The President of Shiina Clean Life, the garbage collections company, meets with us at City Hall. There we outline our project proposal. We would like him, please, to deliver all the rubbish from the Library to our studio for a week. Potential problems are discussed and resolved. He arrives personally at ARCUS two days later to tell us how much it will cost. From his briefcase, he removes a beautifully headed pale green cardboard foolscap wallet with a single white sheet inside. It will cost us ¥1,000 per day. (That’s about £6.) We bow graciously at the affordability.

The meetings about meetings culture does slow things down but it seems to have a high success rate. It also makes you feel wonderfully good. I am happy to get my rubbish. The President of Shiina Clean Life is happy to be able to help. ARCUS is happy that I am happy. City Hall administration is happy that ARCUS is connecting with the community. And because we all see each other being happy, we are even happier. If part of my strategy as an artist is to make social connections, which I think that it is, then the Japanese model of face-to-face meetings could well be one way forward. Having stated that, I cannot imagine having the same wonderfully good feeling on departing from a face-to-face meeting with, say, Camden Council garbage collection services.

We also made a visit to the recycling centre that receives Moriya’s bimonthly household paper waste. It was incredible and also strangely humbling. Giant bales of colour matched paper stacked on top of each other. 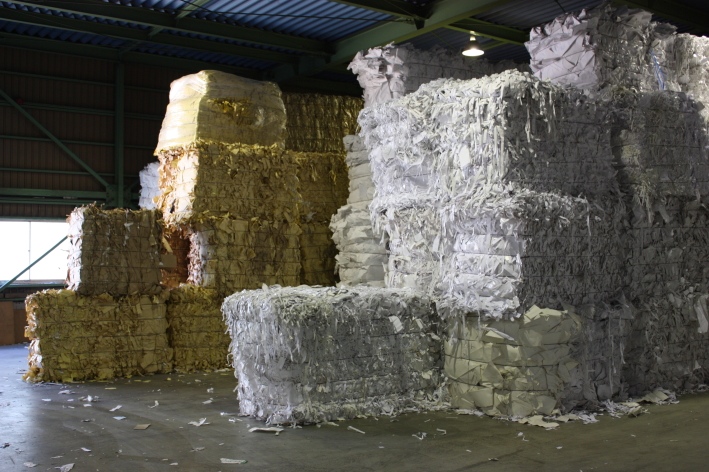 Yes, they even colour match their waste paper. And that is why I am Japanese.

These proud and wondrous paper battlements seemed at once to justify the aims of my project here while at the same time calling my process to account. Their epic beauty clearly highlighted the value of rubbish – both aesthetically and economically as a commodity sold by weight – but they also made my small library seem insignificant. Wouldn’t it be better to simply organise a tour to the bales?

And then I got ill.

And then it really did become a rubbish week.

I can honestly say that I haven’t had such a violent fever since I was a child. Four nights of soaking wet sheets, continually changing my t-shirt, eventually sleeping on a towel to try and absorb the water that was pouring out of me; hot showers at 3 a.m. to try and arrest my chattering chills. Groggy days spent groaning and gargling; washing and drying all the salt wet linen; agonizingly slow trips to the local shop for fresh food. I wasn’t good for much except ‘coping’. Thank goodness that someone had lent me all 49 episodes (with subtitles) of the historical television drama epic Yoshitsune. (Come to think of it, I wonder if maybe I got ill because I was lent all 49 episodes. I did think, when they were handed over: there is no way that I am going to have time to watch all those.)

Yoshitsune is the NHK (the Japanese BBC) drama about the life of Minamoto no Yoshitsune (1159-1189) the late Heian and early Kamakura general of the Minamoto Samurai clan. If you crave the history then a concise biography can be found at the following link:

It is very dramatic. Yes, as the world prepares to hear the outcome of the vote to see who will be the figurehead of the only real superpower there is, I am sweating into my futon watching the dramatisation of a political show that is already over.

It is highly gendered. Men, by in large, speak with a deep, gruff, sometimes almost hoarse, guttural intonation.

While ‘feminine’ women do so in an almost absurdly high bell like sing song. It has been great fun repeating the odd word here and there ‘in character’.

The sex is entirely implied. There isn’t so much as an onscreen hug, let alone a kiss. I haven’t inquired about how the strict obscenity laws in Japan filter down to mainstream television drama but a bit too much is left to the imagination.

Only he’s dead by the end of the episode and my fever is still rampant.

To be honest, for most of his onscreen time, the hero, Yoshitsune just stares moodily into the middle distance and breathes thoughtfully.

Finally he sees some real action in episode 25, where his ‘successful rear-assault marks the beginning of a consecutive series of victories as leader of the rear’. (I’m just copying down the subtitles.)

This is what we’ve been waiting for. Ataaaaaaack!

And then he goes back to being pensive again.

And who is the dashing young actor who plays this outstanding warrior, this man among men, this mighty fearsome fighter? Well, it is the popular actor Takizawa Hideaki (nickname Tackey) who won Best Actor for his portrayal in the 8th Nikkan Sports Drama Grand Prix (I have no idea). And, erm, well, erm, this is his spotlight photo.

You know, I’m sorry, but I really don’t get the straight guy hair thing here. It’s like, the more you look like a teenage girl Country and Western singer, the better. But that’s what the women here seem to want.

Episode 30 was a real turning point for me personally. I couldn’t believe that I had been febrile and prone in bed for THIRTY EPISODES of Yoshitsune. That is a lot of fever. Maybe I should go and see a doctor.

Poor ARCUS, who have to deal with all my rubbish requests, now have to take on board my illness.

I want to see a doctor.

Takashi picks me up early. Out of politeness I am wearing one of the paper ‘infection provention’ masks that I bought as a joke present for a friend back in London. I realise how tiny my face is as it is practically mummified by the thing. I feel ridiculous but try to remember that everyone here wears them. (I am so glad that it is not compulsory for me to take a photograph of myself wearing one of these masks and show it to you). We arrive at the hospital (there aren’t really separate GP surgeries here) and fill in some forms. I wait for my name to be called. I am thinking, this is a waste of everybody’s time. I have the flu. I just need to see it through. What can they do but tell me to suck on lemons and take aspirin? Eventually my name is called. (You know, people who have not heard it practically never pronounce my name correctly in the UK but here, everyone always gets it right. I think it must be something to do with the phonetic transliteration. There it was, a perfect “Joshua Sofaer-San” out the loudspeaker.)

We had already ticked various boxes and scribbled in answers on one of the forms: number of days ill – 5, cough – yes, pregnant – no, fever – yes, runny nose – no etc., etc., so he had the basics before we went in.

It was over in about 30 seconds. Did I have trouble breathing? No. Did I have a good appetite? Yes. Could he listen to my chest. I unbutton my shirt. Hmmm. 5 days of fever. He wants to give me a chest x-ray. Is that OK? I guess so. OK, then he’ll see me a bit later on. Take this form to door number 14. And we’re off again with more forms.

A chest x-ray? What on earth was going on? I have had a fever for the last 5 days. I need something stronger than aspirin. I felt cheated. I had my story all planned out but wasn’t given a moment to tell it.

My chest is x-rayed by a smiley radiologist with a runny nose.

By this time we have been at the hospital for nearly two hours and Takashi has to go to ARCUS, so with extraordinary generosity his wife Junko, who works for herself and so can be a bit more flexible with time, came to take over as my translator, armed with her portable electronic bilingual dictionary.

We are called back into the consulting room. This time the Doctor is wearing a mask too.

The x-rays of my lungs are on his computer screen. He points to some shadowy bits and explains something to Junko. Junko checks her electronic dictionary, turns to me and calmly says: “You have pneumonia.”

Apparently there’s been a spate of cases. (To be honest, I knew that all this travelling around that I have been doing over the last year and the various stresses that it has brought was going to catch up with me eventually.)

I am advised to take an antibiotic drip immediately followed by a course of pills. Nobody seems overly concerned, so I manage not to be myself.

As I am lying on the hospital bed, the nurse precedes each separate action with an explanation and a request to proceed, all in Japanese of course. Even the alcohol wipe used to swab my arm before the blood sample was taken, got a request for permission. I give a clear and sharp ‘hi, wakarumas’ (‘yes, I understand’) in my best Japanese accent to everything, thinking of Yoshitsune on receiving orders from the Monk Emperor, even though I don’t really know what exactly she is referring to at any particular time. Her one English word, just before she inserts the cannula for the drip is: ‘pain’. Actually there wasn’t much more than a little scratch and I could almost immediately feel those little Samurai molecules at work on the Dickensian phlegm in my lungs.