Yes, before the pumpkin decorations were cut from their strings (Happy Halloween!) the Christmas marketing opportunities, erm, I mean celebrations, were ready to take the to the shelves.

Although there isn’t a baby Jesus in sight, nor wise men or angels and Mary and Joseph seem never to have existed, Christmas trees abound, as do snowmen. There are cattle, but they are not lowing at the manger. Cows are everywhere in preparation for the New Year celebrations (which in truth are far bigger deal). 2009 is the year of the cow.

It is surreal to make my way to the sushi counter of the supermarket here accompanied by Frank Sinatra singing The Christmas Song but it is just another example of Japanese culture that decides what ‘bits’ it wants from the rest of the world and often does them better.

Chestnuts roasting on an open fire,
Jack Frost nipping on your nose,
Yuletide carols being sung by a choir,
And folks dressed up like Eskimos.

…and off to get some tuna sashimi.

Actually chestnuts are in season at the moment and it has been a marvellous opportunity to indulge my absolute love of them. Everything becomes chestnut for a few weeks. I even had chestnut tofu a couple of nights ago.

The week started with a trip to Kappabashi – kitchen land – which is an area of about ten blocks devoted to culinary equipment and eating utensils, in the centre of Tokyo. Shop upon shop of everything you could possibly imagine to make and serve the perfect dinner…

…and of course, wrap it.

As well as buying every kitchen aid going, you can also buy the food you might want to end up with – in plastic. Kappabashi is as famous for its plastic food as anything else.

I was looking for jars to display some of the rubbish for my installation and there was an overwhelming variety of choice.

The Rubbish Library / Library Rubbish is really beginning to take shape now. Although the fabrication of the library itself is running late (clearly the time keeping of carpenters is not culturally variable) I am really happy with how it is shaping up.

I have spent hours and hours and hours washing rubbish. But I have finished the last bento box and now I get to the fun bit of thinking how it will all be displayed, archived and indexed. I am also planning a series of events including a champagne reception for the ‘bin men’; a traditional English Afternoon Tea; opening the library as a luxury hotel for a night; and a final event in which you will be able to take your aggression out on some of the books by destroying them. So there is a lot to do and I am spending most of my time in the studio now.

However, as ARCUS was shut at the weekend, I went on a two-day holiday, which might be my last opportunity to travel overnight before I have to leave.

My trip took me to Izu Hanto, which is the peninsula underneath Yokohama, about 100 km south of Tokyo, formed a zillion years ago by an eruption from Fuji. I was interested to go there for several reasons, not least of which was because it is the territory that continually appeared in Yoshitsune (see ‘Rubbish Fever’ below) and because it is where the Kaleidoscope Museum is located.

Travelling on the regular commuter train along the coast (it was far less expensive than the Shinkansen) I was thrilled by the ingenuity and thoughtfulness of the carriage designers, that they had given the traditional coach a makeover with large windows and side facing seats, on the coastal side of the train, so that passengers can admire the view.

I’m sorry that there is no view in this picture, I was too busy admiring it. Here is a coastal view from Izu, looking east to the Pacific and beyond.

The Kaleidoscope Museum is a small, privately owned, eccentric little place, with lots of kaleidoscopes rather unnecessarily housed in ‘fun’ ways: you picked up telephones, peered through post-boxes, lifted up toilet seats and the like. The rather naff exteriors didn’t seem to do anything for the genuinely beautiful interiors. I hadn’t realised that there was such diversity in the kaleidoscope genus. The real highlight was the largest kaleidoscope in the world, the ‘Space Walk’ in which you enter into the kaleidoscope itself. Here are a few shots of the ever-changing interior:

After an overnight stay in a local ryoken, I headed for Kamakura to see the giant bronze Buddha and Hase-Dera Temple.

The Hase-Dera Temple has been a holy site since 736, with a series of ‘halls’ built and sanctified up until very recently. It was surprisingly moving and very beautiful. Particularly effecting was the Jizo-do Hall with thousands of little Jizo stone statues standing in long rows. They are there to comfort the souls of children that have died or were unborn. Some parents had left toys and sweets as gifts by the main golden Jizo-Bosatsu statue.

In the Temple gardens, this bamboo fountain (the opposite of Versailles) showed that beauty is also incredibly humble.

Down the road is the Daibutsu, the Great Buddha of Kamakura. This bronze statue of Amida Buddha, stands on the grounds of Kotokuin Temple. It was originally housed in a large hall but that was washed away in a tsunami at the end of the 15th Century and since then has been in the open air.

Cast in 1252, it is over 13 meters high and the second largest bronze Buddha in Japan. You can go inside it.

It took me a moment to realise what these were but in a portico nearby are a pair of giant rope flip-flops for the statue to wear!

Apparently a couple of years ago there was a massive outcry as some teenager had scribbled nipples onto the sacred chest, which made me realise that I haven’t seen any graffiti at all since I’ve been here. Not even one little tag.

On the way back to Moriya, I stopped off in Tokyo and went to the Kite Museum, which I had spotted marked on my map. This one room museum was incredibly difficult to find but well worth the effort. It was really very beautiful.

Kites of every shape and size but with an emphasis on traditional Japanese paper. 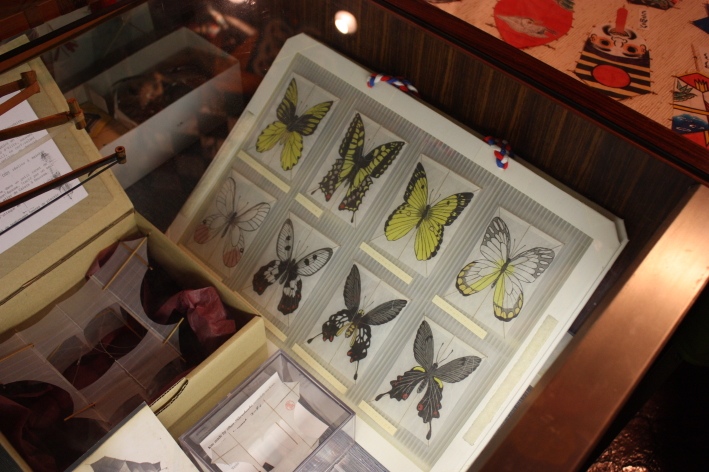 And then it was back to ARCUS to sort some more rubbish. The countdown has commenced. Open Studio in two and a half weeks.